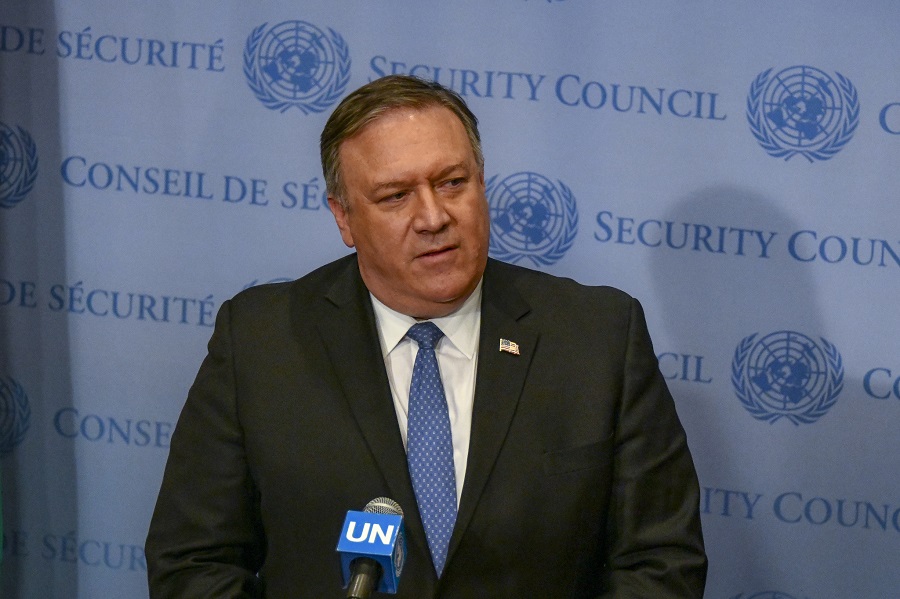 Interview With John Bachman of Newsmax

QUESTION: Mr. Secretary, thank you for the time today. I want to start with Paul Whelan, the retired Marine American now being detained in Russia. I understand that Ambassador Huntsman had an opportunity to see him and talk with him. Can you give us an update on his status?

SECRETARY POMPEO: I don’t have much to update, but the American people should know that the safety and security of Americans traveling abroad is of the utmost importance to us here at the State Department and throughout the United States Government. We’re doing everything we can to make sure that he’s treated appropriately and that we get the information we need.

It is the case Ambassador Huntsman spoke with him yesterday, had a chance to ensure him that we’re doing all that we can to make sure that he gets the things that he needs. And then Ambassador Huntsman had a chance to talk to the family as well. I can’t say much about the conversation, to protect their privacy. But the American people should know we’re very focused on this at the most senior levels of the United States Government.

QUESTION: And in December you gave Russia a 60-day heads-up on the INF Treaty, telling them that they need to comply or that we were going to pull out. Is there any status update to that? We’re about 30 days into that.

SECRETARY POMPEO: So, yes, we’re now almost exactly 30 days from the deadline which we provided. And unfortunately, the Russians have made no effort to comply with the treaty any more than they did for the previous four or five years we’ve been having these conversations with the Russians on this. We’re going to continue to talk with them to try and urge them to return to treaty compliance and at the very least commit to returning to treaty compliance. But it makes no sense. It makes no sense for a treaty with two parties, only one of whom is complying, for us to stay in that.

We’ll work with our European partners. This is very important. It’s of great importance to them to make sure that we get the strategy right.

QUESTION: But today’s the 25th anniversary of the START II Treaty, a day when George H.W. Bush, President Bush, declared the Cold War over. Are we effectively in a new cold war?

SECRETARY POMPEO: I was a soldier in the late ’80s, stationed along the east – then East German border, right up until the final days of the communist empire there. We’re not quite back to that place today, and I’m happy about that. But it is also the case that we need the Russians to behave in a way that’s consistent with the rule of law and the things that – the value set that we hold every nation accountable to. Their actions in many parts of the world aren’t consistent with that, and our conversations with them, whether it’s across counterterrorism campaigns or the like, make clear that that’s our expectation and we’re going to do all that we can to ensure that they do.

SECRETARY POMPEO: Well, I don’t want to speculate on what we might do in response to any particular action by the Russians, any more than I would on an action by any other country. But this administration’s been incredibly strong in responding to Russian actions, whether it was the chemical attack that took place and Skripal or the connectedness between the Russians and the chemical attacks that took place in Syria. We’ve sanctioned senior Russian leaders. We’ve provided defensive weapon systems in Ukraine, something the previous administration refused to do. We’ve pushed back against Russian malign behavior, all the while trying to develop a relationship with them that could prevent us from having to do anything that’s more serious than that.

QUESTION: Now it seems like that timeline may be delayed a little bit, and Saudi Arabia has – or I’m sorry, and in Afghanistan, the same situation. Can you give us an update, the official American policy when it comes to troop levels in Syria and in Afghanistan and the timetable for their withdrawal?

SECRETARY POMPEO: So the President is not ambiguous with respect to Syria. Our troops are coming out. The President also made very clear that we needed to continue the counter-ISIS campaign, and we needed to continue to ensure that we did the things to create stability throughout the Middle East. The counter-Iran campaign continues. We’ll do all of those things. We’ll continue to achieve those outcomes. We will simply do it at a time when the American forces have departed Syria.

I can’t give you a timeline.

SECRETARY POMPEO: — when it is we’ll be departing. But the President’s mission there – guidance to us is unambiguous, and we’ll get that done.

QUESTION: Lindsey Graham said he had a meeting with the President and he heard some things that changed his mind a little bit. But is the President open to advisors – his advisors and other people like Lindsey Graham and their assessment on the situation in Syria? Are those discussions ongoing?

SECRETARY POMPEO: Yeah. No, look, I’ve been working with the President for a couple years now. My sense is the President is always willing to hear from others who have different viewpoints than him, whether they’re from outside the administration or those of us who are working there. He wants to know our judgment. It’s the reason he brings senior leaders around him. And then he’ll make his decision, and our mission is to go execute that in a way that’s consistent with his guidance.

And we’re certainly going to do that in Syria – across all fronts. Not only the withdrawal, but all of the other elements that the President laid out: the importance of ensuring that the Turks don’t slaughter the Kurds; the protection of religious minorities there in Syria. All of those things are still part of the American mission set.

QUESTION: Speaking of Turkey, President Erdogan is another person that’s very important, and our relationship with Erdogan is important. You and President Trump worked very hard; you got Pastor Brunson to come back. That’s a positive thing. But there are reasons to question Erdogan. Is he reliable as an ally?

SECRETARY POMPEO: So we still have lots of things to work with on the Turks. They’re a NATO partner. There are places where they’re very supportive of the things that Americans care about and which keep Americans safe. There are other places we have real concerns. We still have Americans that are being held there. And so the conversation with the Turks continues. Ambassador Bolton and Jim Jeffrey will travel there next week to talk about Syria. There are lots of places where we need to work with President Erdogan and the Turkish leadership to get good outcomes for the United States.

QUESTION: I know we’re short on time. One more question on Iran, if we have the time for it. There were new sanctions put in place on Iran recently, but waivers were granted for those sanctions. Is there any point in time when those waivers could come to an end?

SECRETARY POMPEO: Oh, sure. The sanctions and the waivers were for six months. We are continuously evaluating whether they make sense given our policy, right? We still want to make sure that we’ve got enough – a well-supplied crude oil market. But at the same time, we want to ensure that we’re complying with the requirements that the sanctions on Iran have the ultimate goal which we’re trying to achieve: creating an outcome where the Iranian people – the Iranian people can have better lives than they have today under this tyrannical regime.

QUESTION: Mr. Secretary, thank you for your time.

SECRETARY POMPEO: John, thank you too. Have a great day.