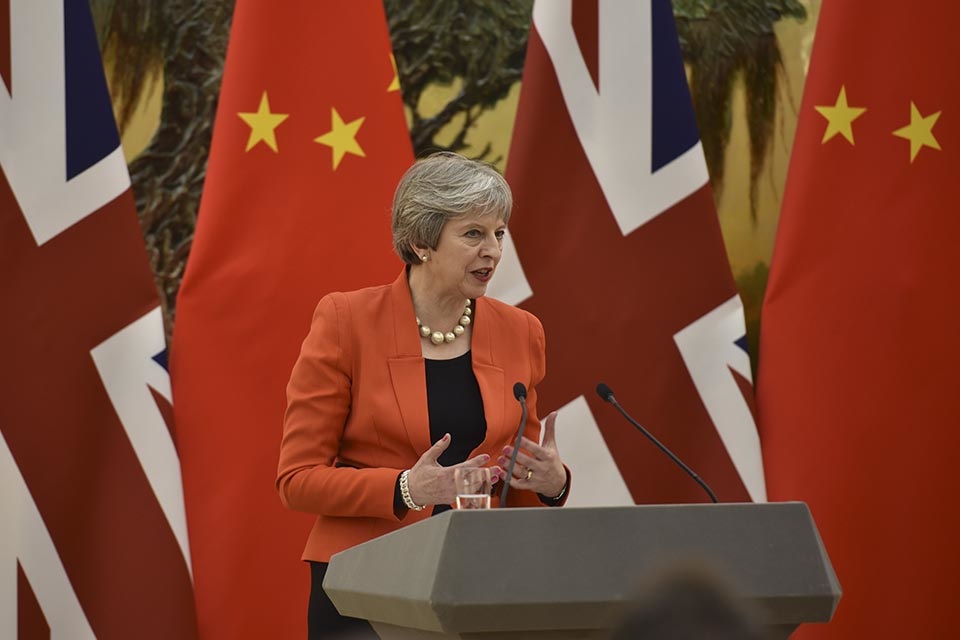 Prime Minister Theresa May spoke in Beijing about building on our deep and mature ties with China, during her first visit to the country as Prime Minister.

I’m pleased to be here in Beijing today, on my first official Prime Ministerial visit to China.

And although I may be visiting in winter I’ve had the warmest of welcomes for which I am grateful and I welcome the opportunity we’ve had today to discuss a wide range of topics in an open way, important issues which face us both and I look forward to continuing discussion over dinner tonight and with President Xi tomorrow.

I am pleased that we have agreed to intensify the “Golden Era” of UK-China relations.

The UK and China are both global powers with a global outlook. You made reference Premier Li to the UK leaving the EU as we do so we become ever-more outward-looking and as China continues to reform and open up, we are committed to deepening our strong and vital partnership and that relationship.

Our relationship is broad and deep, and it delivers real benefits for both countries. We are working together to tackle global and regional security challenges such as North Korea, modern slavery, threats to aviation security; to build sustainable economies of the future and enhance our bilateral trade and investment relationship; and to develop our strong education and societal links.

Allow me to say a few words of detail on each of these.

As fellow permanent members of the UN Security Council and the G20, we are committed to jointly addressing global challenges, indeed steel is one of those challenges that the G20 has discussed, and protecting and promoting the Rules-Based International System.

We have discussed North Korea, agreeing that its pursuit of nuclear and ballistic missile programmes is illegal, reckless, and poses an unacceptable threat to international peace and security.

We have agreed the full and effective implementation of UN Security Council sanctions is vital to persuade the North Korean regime to change course and abandon its illegal activity.

And we have agreed today new measures on aviation security, designed to improve aviation security standards in both the UK and China by sharing more information and undertaking visits to share best practice and observe standards of implementation.

We will also do more together to tackle the scourge of modern slavery. To disrupt and prosecute the organised crime groups responsible and to protect victims. And we will begin new joint work to tackle other forms of serious organised crime, including the illegal supply of synthetic drugs.

We’ve discussed how our economies have complementary strengths. Trade between our two countries is already at record levels, worth over £59 billion, UK exports to China have grown by over 60% since 2010. The UK is already one of the largest European recipients of Chinese Foreign Direct Investment. The UK is the world’s largest exporter of financial services and UK firms are leaders in China’s market.

We are determined to deepen our trading relationship even further, and are ambitious for what our future trade relationship will be.

We will work together to explore all options to deliver a high level of ambition for the future trading relationship and have today launched a joint trade and investment review to identify priorities for promoting growth in goods, services and investment. And as Premier Li has referred to, later today we have the inaugural meeting of the new UK-China CEO Council, which will bring together business leaders and Ministers to strengthen trade and economic cooperation.

To pave the way for this ambitious future trading relationship, we have agreed new measures to improve market access in China and remove barriers to trade, includes an agreement make progress on lifting the BSE ban on British beef exports within the next 6 months and to an agreement to allow exports of a broader range of dairy products.

We have also agreed to open up the Chinese market to our great UK financial services expertise to reach more Chinese consumers.

And we’ll be pleased to welcome a significant number of major new commercial deals due to be agreed during this visit expected to total over £9 billion pounds, creating and securing jobs and prosperity both here and in the UK.

We will work together to encourage free and fair trade, ensure a transparent, rules-based multilateral trading system, and build an open global economy that works for all. And as partners committed to global free trade, but as our companies innovate and create new products they are confident that their intellectual rights and property will be fully protected including against cyber threats.

And as Premier Li mentioned and reminded us we’ve also discussed overcapacity in global market sectors such as steel and the need to see CG20 principles adhered to and further action taken to ensure unfair trading practices are tackled.

Our societies share broad and deep cultural ties. There are already strong links between the people of the UK and China, not just between our governments.

Chinese students already constitute the largest single source of overseas students in the UK, with the UK welcoming 155,000 students currently in the UK, who make a valuable contribution to your society, worth as well as adding an estimated £5 billion annually. There are also now some 9,000 young British people studying and interning in China, with numbers up by 60% since 2013.

And today we have agreed to go even further on our education partnership, including by extending the pioneering Shanghai Maths Teacher Exchange primary school programme for a further two years to 2020, and expanding the programme to secondary schools.

We have also agreed to launch a new “Global Partners 2020” programme, to build better direct links and networks between our future leaders across government, business and academia.

The UK and China are global partners for the long-term.

We are committed to building on our deep and mature ties to promote global peace and prosperity in the 21st century.

So Premier Li, I look forward to continuing our discussions.

Question: What do you plan to do differently on brexit and outside of brexit? And on international threats, Trump called China a threat? Do you agree?

PM: On the first point that you raised, in relation to what the government is doing on Brexit and on the domestic agenda. On Brexit we’re obviously working to that future trading relationship with the EU, we achieved sufficient progress in December and we’re now taking that next step to ensure we get the best brexit deal for the UK and that means will be a deal that takes back control of money, laws and borders and also able to maintain a good trading relationship with the EU for the future, because that is good for both the UK and EU.

On the domestic agenda if you look at what we’ve been doing over the recent weeks and months I think that there are very many people who want that they and their families can achieve the British dream, of ensuring that each generation has a better future than the last. For a lot of young people that’s about owning their own home, being able to get their foot on the housing ladder, we’ve cut stamp duty for 95% of first time buyers and I’m pleased to say that figures out only last week show that the highest number of first time buyers in the last year for a decade. We’ve also been ensuring that young people get start the best start in life with a good education, nearly 2 million more children in good and outstanding schools now. And we also want to ensure in the work we do that we continue to cut the deficit and develop a balanced approach to economy, we are seeing good jobs being created, unemployment is at its lowest level since the 1970s and yes we do need to do more, and we need to ensure that we are talking about what we’ve already achieved to those young people who worry they’ll get their own home, to parents concerned about the education their children will be getting and about the jobs for the future for their children. And that’s what we’ll be doing, and what we’re committed to delivering on that.

And if you talk about the role of china, what we’ve been discussing here is the excellent relations we have with our golden era of UK – China relations. But how we can be working together not just to improve those links between us which will be of benefit in the UK and in China and in delivering and working together on those global issues such as N Korea and other issues like modern slavery which have an impact around the world.

Question: I understand a series of corporate agreements have been signed, same time witnessing rising isolationism – what measures will china and the UK take to boost globalisation and free trade? And to the UK Prime Minister, Brexit is not just an issue for British but also for Chinese people – china the best partners for the UK after Brexit – how do you see prospects of relationship with china?

PM: Thank you and the second question to me was about Brexit and the impact that this will have. As we leave the EU we will become a country that is able to operate an independent trade policy to sign free trade agreements around the rest of the world. And that is exactly what we will be looking to do. And it is in the best interests of the people in the UK but also those free trade agreements bring benefits to the countries with whom we sign them. Also, we will be a more outward looking country, to build a global Britain that is able to sign those free trade agreements that is able to continue to play its role on the world stage in the various multilateral organisations we’re part of, working alongside china and other members for example in the United Nations.

But I think in terms of the future for the relationship between the UK and China after we leave the EU, today we’ve agreed a joint trade and investment review which I think is a good step towards looking towards what our future trade relationship can be when we have that freedom outside membership of the EU of being able to arrange those agreements by ourselves on a bilateral basis.

And as Premier Li has said, there are many concrete examples already of how that trade relationship is developing between our countries. And I think the message of free trade and the importance of free trade is best seen by the examples of the actual trade we see which brings jobs and investment to China and the UK.