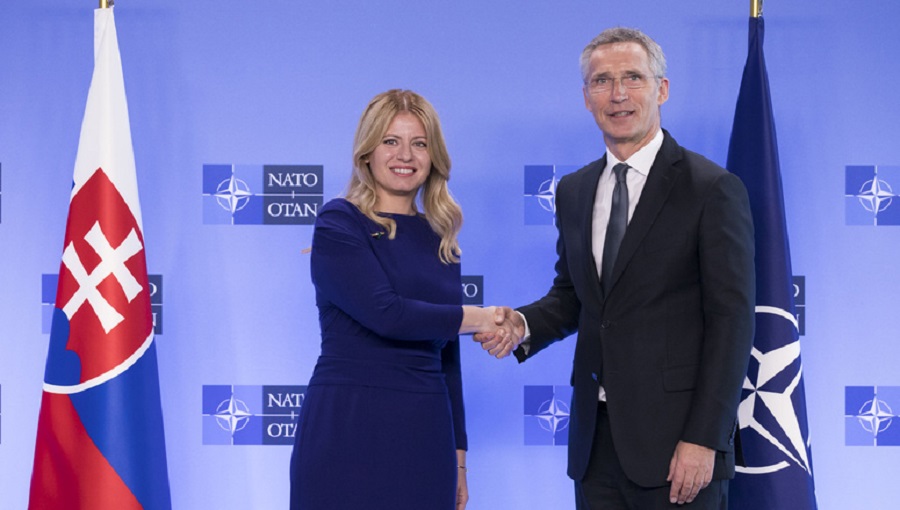 It’s a great honour and pleasure to welcome you here to NATO Headquarters. And great to see you here among so many friends and Allies. Let me start by congratulating you the election and your inauguration as president of Slovakia.

And the fact you are here at NATO HQ just 10 days after your inauguration sends a very strong signal of your personal commitment to this Alliance and of the strong commitment of Slovakia to the NATO Alliance.

This year we celebrate the seventieth anniversary of the founding of NATO.

And we celebrate the fifteenth anniversary of  Slovakia joining NATO.

And since then, Slovakia has contributed, made many contributions to our shared security.

We are extremely grateful for your contribution to the multinational battlegroup in Latvia, a strong sign of Allied solidarity.

And Slovak troops are part of that battlegroup in Latvia.

The we appreciate that Slovakia hosts a NATO Force Integration Unit, which can facilitate the movement of Allied forces whenever needed.

Slovak instructors have also been training the Iraqi security forces, in key areas like demining and equipment maintenance.

And in Ukraine, Slovakia leads a Trust Fund focused on dealing with unexploded munitions.

We are also grateful for the fact that Slovakia has contributed and is contributing to the NATO training mission in Afghanistan, helping to prevent Afghanistan once again becoming a safe haven for international terrorists.

And then, last but not least, I’d like to thank you for your very strong commitment and the progress Slovakia has made on burden sharing. On investing more in defence. You started actually not so many years ago on a very low percentage of GDP allocated to defence, and now Slovakia is among the countries with the strongest increase. And your strong commitment and plan to reach 2% of GDP for defence.

So all this demonstrates and illustrates how Slovakia is contributing to NATO in many different ways.

We just had an excellent meeting where the President and I discusses many different  issues, including Russia’s violation of the INF Treaty.

And the importance of standing together in addressing how NATO will respond to the Russian deployment of new nuclear capable missiles in Europe. We discussed the EU efforts on defence. Which we welcome as long as they are part of the wider efforts to strengthen the European pillar within the transatlantic partnership, not to duplicate but to complement the efforts of NATO.

And then we also addressed the enlargement of NATO. We welcome the fact that soon North Macedonia will be the 30th member of our Alliance, showing that our door remains open.

In your inauguration speech, you called NATO the pillar of Slovakia’s defence and security.

Because today’s security challenges are too big for any of us to face alone.

And I could not agree more. It shows the importance of all standing together, based on the idea one for all, all for one. And as long as we are united, we are all safe, and that is the success of NATO, that we protect eachother.

ZUZANA ČAPUTOVÁ [President of the Slovak Republic]: Thank you, Secretary General, for your warm welcome. This is my second visit abroad, even though this is very special because the visit to the EU and NATO is actually not a visit in a foreign country, because we have shared interests. Slovakia has been a member of NATO for 15 years. For 15 years we have the best security guarantees to protect our values, and all-important values I treasure and evaluate, that is the rule of law, protection of freedom, democratic values and human rights.

Among my priorities in relation to NATO, I am convinced that at the time of disinformation campaigns, it is very important for us politicians to communicate quietly, substantially and based on facts. At the same time, we have to honour our commitments.

As I said during our meeting with Secretary General, Slovakia is fully aware of its commitments and pledges, because we declared them publicly. In relation to the 2 percent of GDP, we are pleased to achieve this target even earlier, in 2020 – that is two years earlier. At the same time, at home, it is very important to invest all this money in a transparent way to enhance the trust of our citizens into NATO and the Slovak government.

As Secretary General said, we also discussed relations with Russia and Ukraine. I’m worried that current relations with Russia are, so to speak, frozen as it goes for the dialogue. But I insist we have to make effort and cooperate with Russia.  Of course, while respecting fully the values and principles as is human rights and rule of law. At the same time, I understand our Allies in the Baltic region. Therefore, I appreciate the decision to deploy our troops in Latvia. This is the way we, once again, showed that we are a reliable partner of NATO.

At the same time, we want to support Ukraine. I believe that every country has the full right of decision where it wants to belong, whether it is the EU or NATO. I believe that Ukraine most of all needs stability and development.

Secretary General, once again thank you for the meeting today. I look forward to meet you in London at the summit, where we commemorate 70th Anniversary and continue the dialogue.

ZUZANA ČAPUTOVÁ: Thank you. I know about this. I heard this information only from the media. I honour and respect Mr Lajčák, and I believe this would be an honour for Slovakia if one of our politicians hold this job.

QUESTION [Slovak Television]: Currently we talk, or there is much talk about top posts in the European institutions, and how many jobs should be given to women. How important it is in NATO to have women top positions?

JENS STOLTENBERG: I think that if I start to comment on questions like that, I risk saying things that will be interpreted as if I’m commenting on a specific process in NATO. So I think it is a very relevant question to ask, but I will refrain from commenting, just because then I will start to comment on the process we are in the midst of now, when it comes to appointing a new Deputy Secretary General of NATO.

OANA LUNGESCU [NATO spokesperson]: Okay, if there are no substantial questions we will conclude this press point. Thank you very much.