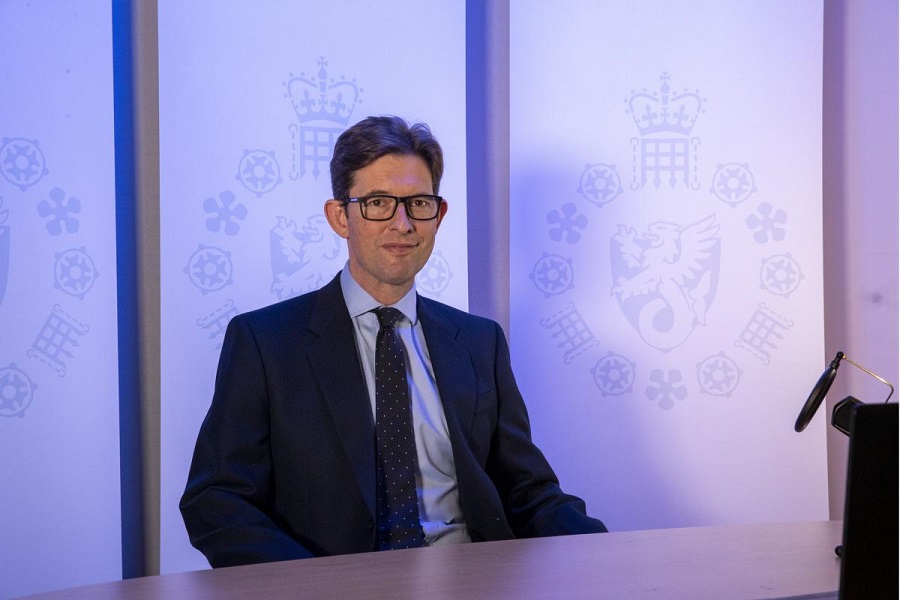 MI5 Director General Ken McCallum addressed a group of journalists for the first time on 14 October, where he spoke about his top priorities and the current threat landscape.

Countering terrorism and hostile activity by States is vital work. If we make too much noise about it, we risk giving oxygen to those who mean us harm. But I do think it’s healthy for the person in this chair, from time to time, to offer the best balanced view we can of the covert threats facing our nation, and a sense of how we’re tackling them. MI5’s operational successes are mostly invisible, but we as an organisation increasingly need to be visible – to open up new partnerships; to reach people whose talents we need; to maintain the trust of the public we serve. In a year when I’ve made my own transition from invisible to visible, I’m pleased to have this opportunity to talk about the work of MI5.

I stepped into this role at the height of the COVID lockdown, and for MI5 just like everyone else, 2020 has been dominated by the pandemic. We’ve sought where we can to help on COVID itself – advising on the safe construction of Nightingale Hospitals; repurposing research originally done on toxic chemicals to help understand how COVID in droplets might disperse in certain environments; offering our skills in data analytics and modelling; simply allowing medically-qualified MI5 officers to step away from their duties here and directly support our NHS. And, crucially, on the vaccine, we’ve been working to protect the integrity of UK research.

Our larger task has been rapidly adapting how we perform our core role of keeping the UK safe. The big shifts in everyone’s lives – reduced travel, more online, and the rest – mean shifts in how our adversaries are operating. Fewer crowds mean terrorists look at different targets; online living means more opportunities for cyber hackers; and so on. Equally, 2020 has demanded shifts in how MI5 itself has to operate; you wouldn’t expect me to get into detail, but common sense will tell you that covert surveillance is not straightforward on near-empty streets. Our people are showing huge dedication and imagination in continuing to provide the essential service the country needs from us; while, like everyone else, bearing the strain on their families and wider lives. I pay tribute to them.

You can think of COVID as giving us a particularly intense phase of the kind of race to adapt we’re always engaged in. The threat landscape never stands still; let me pick out some of what we see in 2020:

Firstly Northern Ireland, where I grew up as an intelligence professional. Twenty-two years on from the Good Friday Agreement, great things have been achieved; Northern Ireland today does not suffer in the way that it did. Nearly everyone has moved on – but a few rejectionist terrorist groups, without meaningful community backing, persist. Our aim is ambitious: of course to get ahead of life-threatening plots – but then to go further, grinding away at the ability of those organisations to mount such plots in the first place. Working in close partnership with the police, we are making important progress, including in bringing terrorist leaders to justice. The more we succeed, the more we give space for all Northern Ireland’s communities to flourish.

Secondly, Islamist extremist terrorism, which by volume remains our largest threat. It is still the case that tens of thousands of individuals are committed to this ideology – and we must continually scan for the smaller numbers within that large group who at any given moment might be mobilising towards attacks. Having someone “on our radar” is not the same as having them under detailed real-time scrutiny. Difficult judgements of prioritisation and risk must be made. That task has become sharper in recent years, as more terrorists have gone for basic attack methods requiring little preparation, meaning there are fewer clues for us to detect in advance – and less time to find those clues.

And now Right Wing Terrorism. In April of this year MI5 and our police colleagues completed the phased transition we had begun in 2017; against this sadly rising threat, MI5 now holds lead intelligence responsibility. We operate entirely the same system as on Islamist extremist terrorism, with cases pursued by the same counter-terrorist professionals within the same part of the MI5/police machine, operating to the same thresholds, prioritised on the basis of threat and risk rather than ideology. This threat is not, today, on the same scale as Islamist extremist terrorism. But it is growing: of the 27 late-stage terrorist attack plots in Great Britain disrupted by MI5 and CT Policing since 2017, 8 have been right wing extremist.

I’ve spent much of my working life trying to stop terrorism. It’s incredibly rewarding work; at moments like those 27 plot disruptions, when we with our partners manage to get ahead of deadly threats, we know we’ve done something huge for our fellow citizens. Sadly the shadow side is also true: when attacks do take place, the human realities are awful. I often say to new joiners at MI5 that the hardest thing about working here is that no matter how much hard work and ingenuity we bring, it isn’t possible for us to stop every attack. Terrorist attacks are always, without exception, sickening. Whenever my phone rings late in the evening, my stomach lurches in case it is one of those awful moments.

Right now we’re particularly conscious of the 2017 Manchester Arena attack, in which Salman and Hashem Abedi’s bomb cut short 22 precious lives and set many other lives on different tracks. MI5 of course offers its very deepest sympathies to those bereaved or affected. As always our immediate task was operational: working with the police on the investigation which ultimately led to the conviction and sentencing of Hashem Abedi. Alongside that we conducted two in-depth reviews, each independently overseen by Lord Anderson. One on the facts of the case – and a second, still wider review, jointly with our police colleagues, looking at how we could improve the overall counter terrorist system. The Public Inquiry will rightly look at the matters considered by both those reviews; we have provided unfettered access to all relevant material, and MI5 officers will give detailed evidence. Since 2017 we have put huge energy into implementing the recommendations of those reviews. We keep striving to find new ways to increase our chances of stopping future atrocities. And we will bring determined focus to any additional recommendations which emerge from the present Inquiry. We absolutely recognise that this constant push is no real consolation to those who have lost loved ones in past attacks. But we all come to work every day determined to do everything in our power to stop awful things happening.

Alongside our counter terrorist work sits our role to protect the UK from hostile activity by States. That perhaps-cumbersome phrase is intended to cover the huge range of what we’re contending with: it’s not just about spies and it’s not just about stealing state secrets. In 2020 we are defending against threats to people, up to and including assassinations as the Alexei Navalny poisoning reminds us; threats to our economy, our academic research, our infrastructure. And, much discussed, threats to our democracy. In the 2020s, one of the toughest challenges facing MI5 and indeed government is that the differing national security challenges presented by Russian, Chinese, Iranian and other actors are growing in severity and in complexity – while terrorist threats persist at scale.

A word on defending democracy. MI5 has dealt across generations with attempts by foreign intelligence services to influence UK political life. But with the range of activity spreading – online disinformation, hack-and-leak, attempted covert influencing of political figures – this part of our work is growing. There are delicate lines to tread here. Responsibility for regulating UK elections rightly lies elsewhere; in a liberal democracy none of us want MI5 to be the arbiters of political fairness. But neither do we want hidden foreign influence in our politics. So we play our particular part, alongside others – and where our investigations throw up reason for concerns, we go there without fear or favour, always abiding by the strict political impartiality which is rightly woven into the Security Service Act.

We tackle hostile activity on two levels: firstly, the operational role everyone associates with MI5, where we directly go after individuals and organisations posing threat to UK national security and disrupt them, sometimes visibly, often invisibly. Second, and at least as important, is our protective role: given that some hostile activity will take place undetected, it makes sense to work with others to increase the UK’s resilience to it. So, taking what we see week by week in our operations, we form pragmatic protective advice – which organisations like the Centre for the Protection of National Infrastructure and the National Cyber Security Centre make available to government, businesses, academia. Sometimes our role is to spot the hidden State hand in the pursuit of promising UK companies whose acquisition might dent our future prosperity and security. On China, we need expansive teamwork – a broad conversation across government and crucially beyond, to reach wise judgements around how the UK interacts with China on both opportunities and risks. The UK wants to cooperate with China on the big global issues like climate change, while at the same time being robust in confronting covert hostile activity when we come across it.

Against this complex backdrop, I am glad that government has announced its intention to bring legislation before Parliament on countering hostile activity. Current legislation leaves gaps; some of the most damaging activity we have to confront cannot currently be pursued through the criminal courts. That cannot be right. The detail of legislation in this delicate area will, as always, need care, and Parliament will perform that role. But the case for legislating – bringing UK defences up to the levels enjoyed by many of our friends – is compelling.

With those who mean the UK harm continually coming at us in new ways, we as an organisation need to outstrip their creativity, seeing early where things might be heading; adapting ourselves towards tomorrow’s threats not yesterday’s; and having the humility to know we’ll sometimes be surprised. Success in that contest turns on MI5 being brilliantly adaptive – now and for the decade ahead. During my time in this role, we will go hard after three big things:

If I want one thing to characterise my tenure in this role, it’s for MI5 to open up and reach out in new ways, becoming brilliantly adaptive in creating new solutions for the challenges of the 2020s. In doing so we will be drawing deeply on creative flair we bring every day to our operations.

To conclude. I’ve spoken today – for the first time as Director General – to lay out how, in a year dominated by a global pandemic, MI5 is tackling the covert threats facing our nation.

Those threats are becoming more diverse and in some ways more difficult to spot. We face a nasty mix – terrorism isn’t going away, and State-backed hostile activity is on the rise. But let’s not make these people ten feet tall. Through hard experience, the UK has a mature national security system; MI5 is a capable member within a genuine team. That team includes, every day, support from individual members of the public.

Much of what we do needs to remain invisible, but what we are doesn’t have to be. In fact, opening up is key to our future success. Our increasingly diverse people, our growing partnerships in all sorts of places, and advances in technology give us reason to be confident. You will know when we’re succeeding – as nothing will hit the headlines.